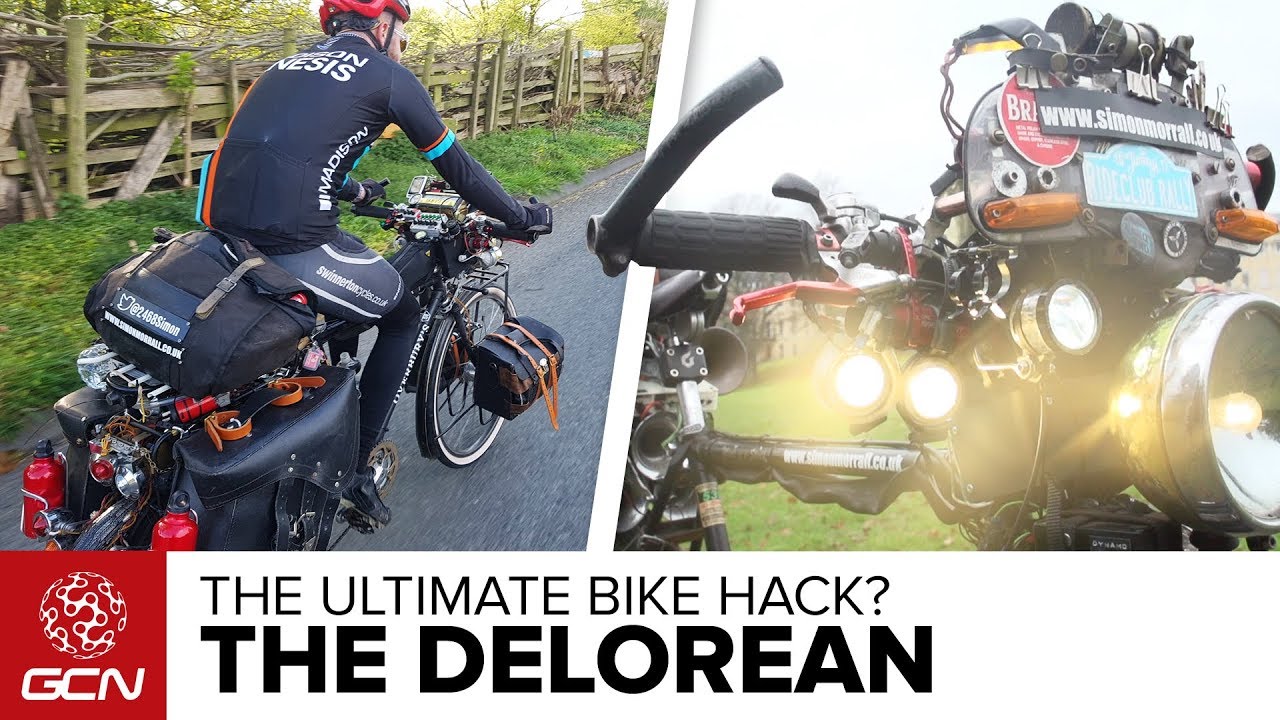 
Simon brought us one pretty special bike to take a look around. We’ve seen some pretty good #GCNhacks over the years, but this is something else…

I’ve got no idea where to start really, so why don’t you tell us how this started, and when.

– Okay, it started about four years ago, I put just USB charger, and a horn, on it, and then, it kinda took off from there, really. I kept adding indicators, more lights, more horns, and it’s kinda grown into this, so–

– Yeah, four lorry horns, which we’re not gonna let off, until later on, in case we draw too much attention from the locals. Okay, let’s start at the front end, because there’s an awful lot going on, just here. Oh, and also, yeah, the only bike I’ve ever seen where you have to turn it on with an ignition.

– Right, let’s take a look at this front end, because as I say, there’s a lot going on here at the control centre.

– [Simon] the control centre, so we got, yeah that turns everything on, and then we’ve got main lights, fog lights, spotlights, USB chargers, find that really useful these days for charging your phone, Garmin, Ipod, and then, we got a rear view camera, so I could see buses, lorries, and other cyclists, and then we’ve got heated grips, so had them on not long ago, they’re still a little bit warm, but yeah.

– Yeah, these were one of the first modifications that you made to this bike.

– Yeah, I put these on first, but I found the battery didn’t last long enough, so I had to get a bigger battery, and then from there, I could kinda keep adding to it, and then, we’ve got normal indicators, front and back, and then if we put them both on together, they’re hazard lights, so if I get a puncture or something, I can put them on at the side of the road.

If you’d like to contribute captions and video info in your language, here’s the link 👍 http://gcn.eu/uA

The Global Cycling Network puts you in the centre of the action: from the iconic climbs of Alpe D’Huez and Mont Ventoux to the cobbles of Flanders, everywhere there is road or pavé, world-class racing and pro riders, we will be there bringing you action, analysis and unparalleled access every week, every month, and every year. We show you how to be a better cyclist with our bike maintenance videos, tips for improving your cycling, cycling top tens, and not forgetting the weekly GCN Show. Join us on YouTube’s biggest and best cycling channel to get closer to the action and improve your riding!

Welcome to the Global Cycling Network | Inside cycling

Thanks to our sponsors: