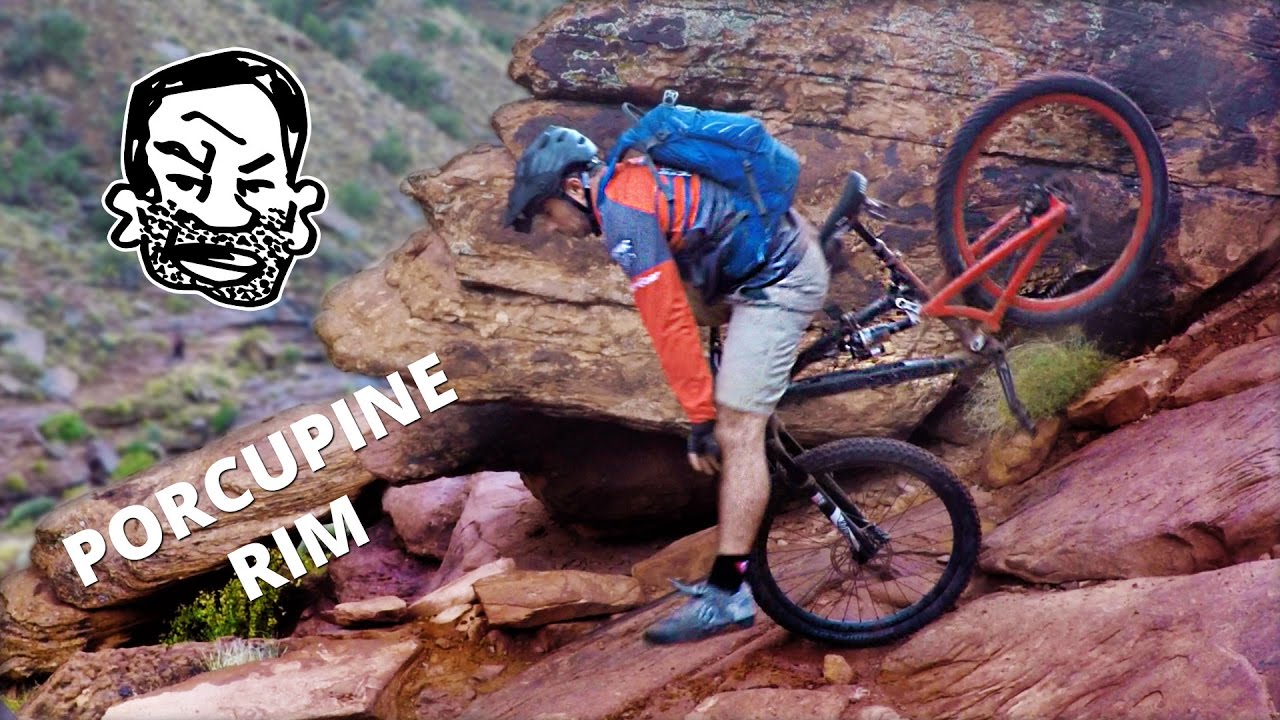 Today, we’re going to ride Porcupine Rim, one of the most technical and dangerous rides in Moab, Utah.

The original plan was to ride a 26 mile odyssey called The Whole Enchilada, for which we had already booked a shuttle. The weather didn’t cooperate, but the shuttle company gave us the option of starting further down the mountain. This meant we could still ride Porcupine Rim. We took them up on that.

The driver instructed us to take Jimmy Keen trail for a few miles. This was a fun, flowy warm up, which ended at UPS, or Upper Porcupine Singletrack. This is where the party gets started.

UPS has everything from slickrock, to sand, to fast and windy sections. Sometimes the trail runs right along the edge of the mountain, revealing amazing views of Castle Valley. When you see pictures of Porcupine Rim you’ll always see shots like this. I don’t know whether the fog and rain made the view worse, or even more magnificent. We stopped quite a few times to to soak in the scenery and let everyone group back up.

The trails are actually well marked, but I somehow ended up off track quite a few times. The others quickly learned the consequences of taking my wheel.

After shredding UPS for a few miles, we reached LPS, or Lower Porcupine Singletrack. This is where things really start to get interesting because you can take one of two routes to the lower section. We took the one to the right, which was an impossibly tight switchback. The second left hand turn took me a few tries to clean. This switchback seemed like a qualifier for what was to come, because the really rough stuff was ahead of us.

We were bombing so many ledges so fast that eventually one got the best of me. It was slanted in the opposite direction of the trail. A few repairs up on the handlebars and we were on our way. Even if you follow the trail on LPS there are so many spots that you can improvise on. This makes choosing your line very important, as one line could be easy flying while another could send you over your bars.

Lower Porcupine Singletrack eventually gives way to a Jeep road, or as the sign says, simply “Porcupine Rim”. This seems to be the only part of the trail that people complain about, and I guess I can see why. It’s the single longest section, which is composed of loose, unvaried, chunky doubletrack. It’s definitely not my favorite section but we were all smiling ear to ear the whole way. If you’re a good descender with a capable bike you can totally bomb the Jeep road. The scenery is also incredible in every direction, and if you’re taking your time, there are fun slickrock features to session along the way. There were a couple of times we stopped just to discuss what an awesome time we were having, so I thought the Jeep road was fun. Still, it seems plain and boring compared to the final section along the Colorado river. This is known as Porcupine Singletrack, and it’s the stuff of legends.

Things get faster in this section, and everything on your right starts to get increasingly interesting. After a few minutes, you’re riding along a cliff, fast as balls. As the exposure increases, so too does the difficulty of the features. It’s like the last level of a video game, where everything culminates into one epic battle to the finish. Things keep ramping up.

We regrouped and reached a pathway between two boulders. That’s me going OTB on a 2 inch high rock. After watching this from 3 different camera angles it’s still not clear what happened. I licked my wounds and climbed back up to clean it.

At the bottom of those rocks, it wasn’t immediately apparent where the trail went, but there was a sign.

Whoever decided to leave this ledge here as a final technical challenge deserves a medal. They could have piled some rocks in front of it, or chipped away at the top to mellow it out, but instead of dumbing it down they left one gem of an obstacle for advanced riders. It took me 3 attempts. If you’ve ridden or attempted this feature I want to hear about it in the comments.

For the whole transcript, please turn on the closed captions.