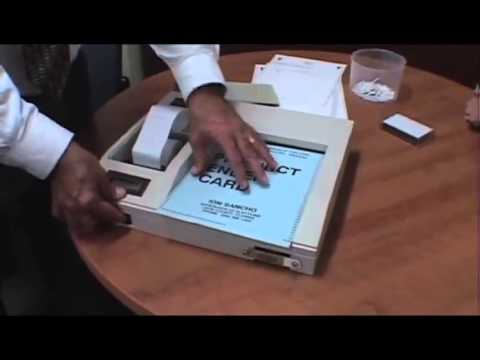 
This is the hack that proved America’s elections can be stolen using a few lines of computer code. The ‘Hursti Hack’ in this video is an excerpt from the feature length Emmy nominated documentary ‘Hacking Democracy’. The hack of the Diebold voting system in Leon County, Florida, is real. It was verified by computer scientists at UC Berkeley. To watch the full movie, visit http://www.hackingdemocracy.com

For updates, visit the official Facebook page at http://www.facebook.com/hackingdemocracyfilm

The disturbingly shocking HBO documentary HACKING DEMOCRACY bravely tangles with our nation’s ills at the heart of democracy. The film the Diebold corporation doesn’t want you to see, this revelatory journey follows tenacious Seattle grandmother Bev Harris and her band of extraordinary citizen-activists as they set out to ask one simple question: How does America count its votes? From Florida and California to Ohio and Washington State, filmmakers Simon Ardizzone, Russell Michaels and Robert Cohen starkly reveal a broken system riddled with secrecy, incompetent election officials, and electronic voting machines that can be programmed to steal elections. Equipped only with a powerful sense of righteous outrage, the activists take on voting machine industry, exposing alarming security holes in America’s trusted voting machines. They even go dumpster diving at a county election official’s office in Florida, uncovering incendiary evidence of miscounted votes. But proving our votes can be stolen without a trace culminates in a duel between Diebold voting machines and a computer hacker from Finland – with America’s democracy at stake.

‘Hacking Democracy’ was nominated for an Emmy award for Outstanding Investigative Journalism.

The UC Berkeley Report can be found here: https://www.sos.state.tx.us/elections/forms/security_diebold_accubasic.pdf

Page 2 of the report states: “Harri Hursti’s attack does work. Mr. Hursti’s attack on the AV-OS is definitely real. He was indeed able to change the election results by doing nothing more than modifying the contents of a memory card. He needed no passwords, no
cryptographic keys, and no access to any other part of the voting system, including the GEMS election management server.”

We hope that as many people as possible will vote because the bigger the turnout the harder it is for someone to rig the total national results.